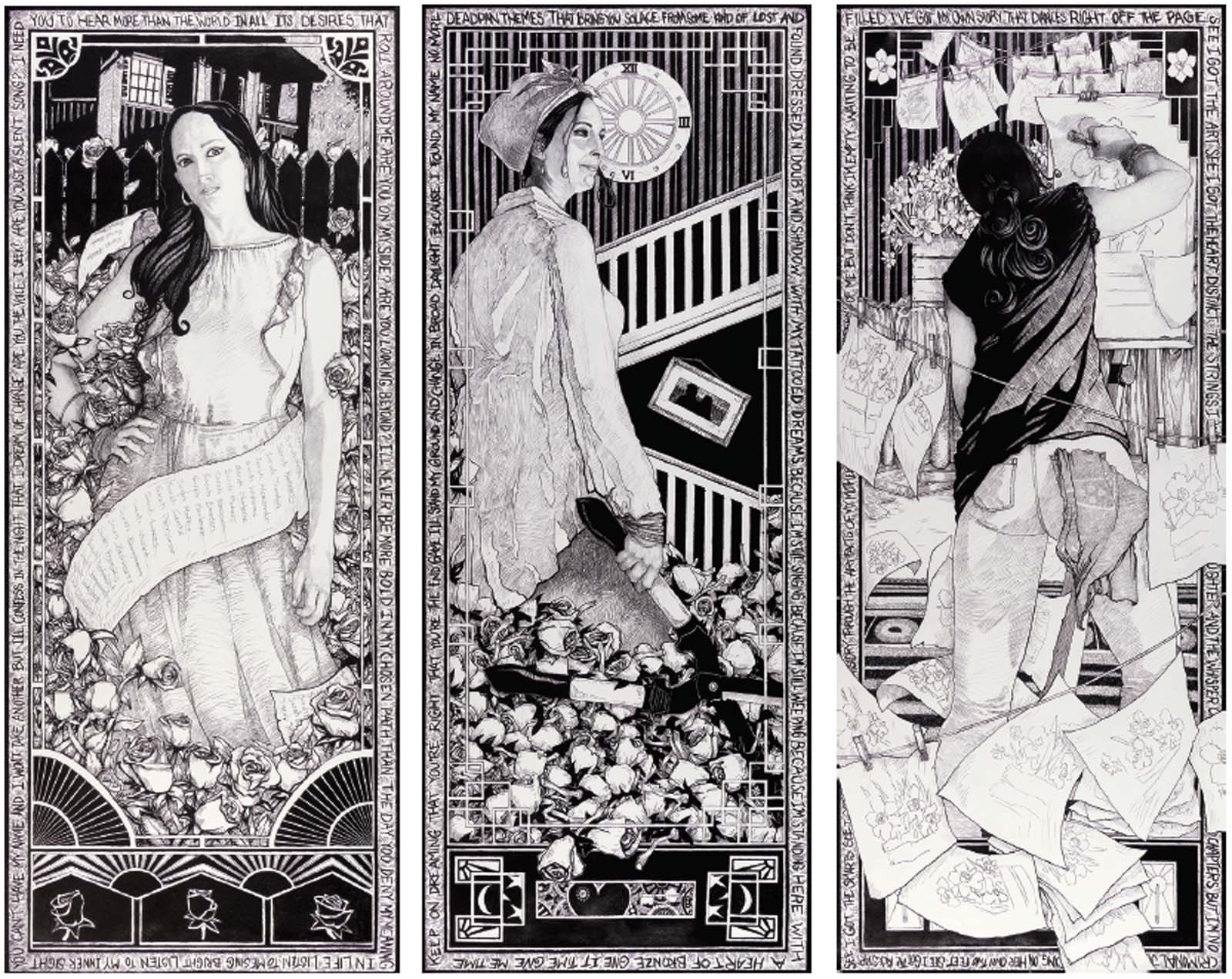 Robert Bean remembers taking art courses in Trieschmann during his year at Hendrix College, whether in the small painting studio or the small drawing studio. He remembers experiencing a tight sense of camaraderie amongst his class cohort and learning about the intellectual elements of art. Both inside and outside of the Art Department, he took writing-intensive, interdisciplinary-focused courses, which continue to influence his work.

Robert Bean earned a BA in Fine Art in 2008 from the University of Arkansas at Little Rock. He currently teaches figure drawing courses at the UA Little Rock and chairs the Painting and Drawing department of Arkansas Arts Center’s Museum School. Bean also owns RB Fine Art, through which he exhibits work, curates shows, and develops exhibition initiatives.

When Bean decided to create the Bulletproof Triptych, he wanted to speak with local women about their experience building an artistic career. He asked Diane Harper, a friend and fellow artist, to gather a few women who would be interested in speaking with him, but Harper organized a panel of 25 women. These women shared their experiences, while Bean listened. He took notes on the discussion, and many of those thoughts and ideas found their way into the piece.

The triptych follows a female artist who evolves with each panel. While she initially follows society’s gendered mandates for her life and artistic practice, she gradually becomes impervious to these regulations. She makes herself bulletproof to the thoughts of others.

Bean represents this transformation through flowers, which overwhelm the woman in the triptych’s first panel. In the second panel, she cuts the flowers which previously swallowed her. And in the third, she organizes the flowers, exacting control over them and using them as a tool for artistic creation.

The rectangular kickplates at the bottom of each panel further reinforce this growth. The first kickplate features three small houses, each holding a singular flower, under the sun’s rays. The similarity between each house represents conformity, the pressure to remain the same as everyone else. The second kickplate depicts a mechanical heart with gears and symbols of the sun, moon, and stars. These celestial bodies represent the passage of time, suggesting the woman changes with its progression. The third kickplate is almost entirely obscured by the woman’s drawings, suggesting she has moved beyond conformity and now creates her own story.

Bean draws inspiration for this work from comic books; the triptych’s three panels link together like panels in a comic strip. Each panel is framed by a narrative poem written by Bean, combining the power of image and text to create a powerful method of visual storytelling.

Bean created the Bulletproof Triptych with charcoal, but abandons the mediums traditional smoky, soft tones to create stark and linear forms. Like the central female figure transforms into someone new and unexpected, the charcoal takes on a new form in its altered use.

Scarecrow
One Night in Baghdad