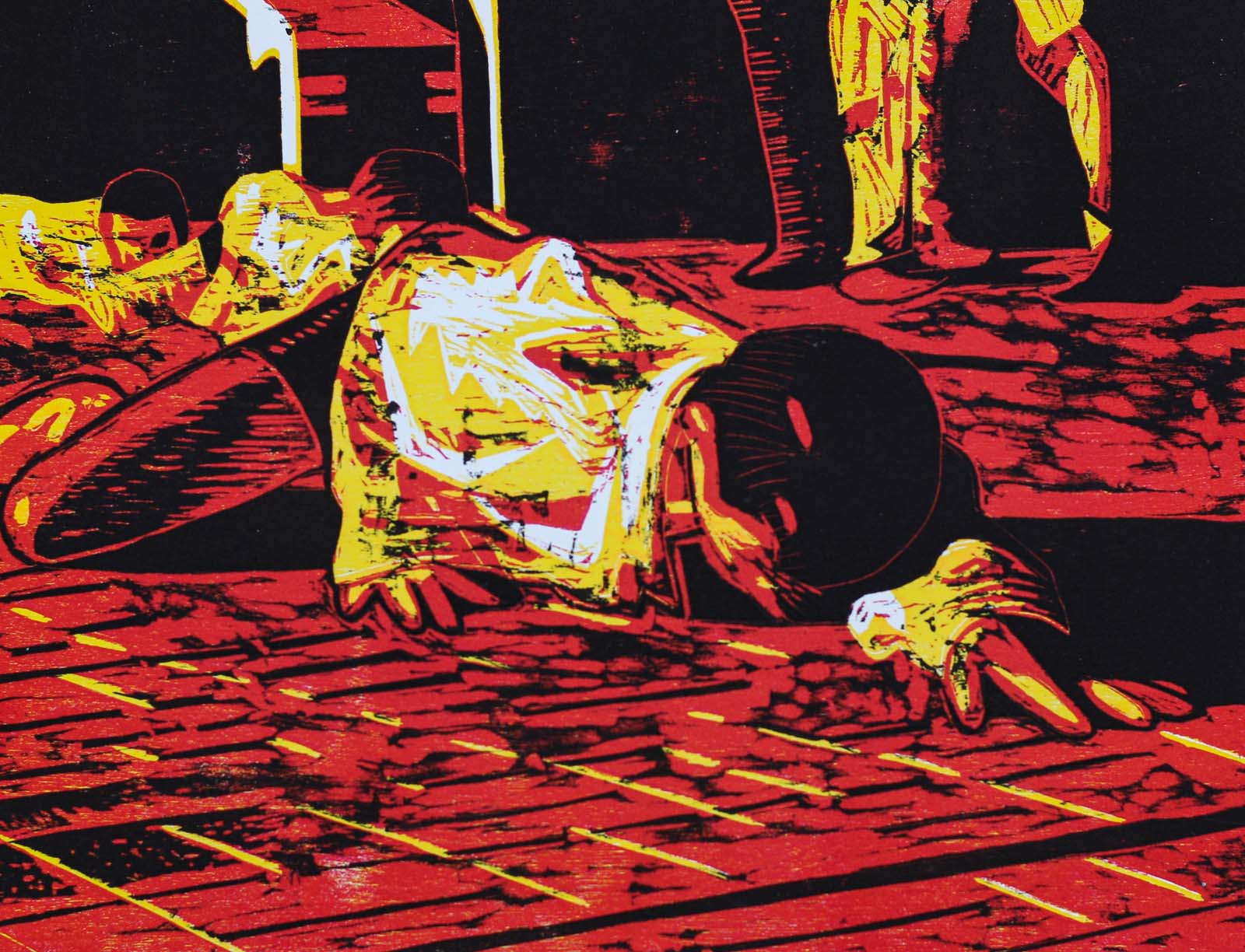 Kristi Vo, a native of Van Buren, Arkansas decided to attend Hendrix College after attending Arkansas Governor’s School on its campus. While at Hendrix, she played on the tennis team and participated in several student organizations, including Campus Kitty, the Social Committee, and the Student Senate. Some of her favorite memories are traveling with the college’s Odyssey Program, which took her to Mongolia for a medical internship, Italy for a language immersion program, as well as Vietnam where she was a volunteer English teacher and was able to meet her father’s side of the family for the first time.

As a Studio Art minor, Vo was heavily involved with Hendrix’s Art Department. She specialized in charcoal drawing and also enjoyed printmaking courses led by Professor Melissa Gill. She created VZ Crawl during her junior year as an assignment for one of Gill’s classes, which focused on layering color in woodcut works.

VZ Crawl depicts Shirttails, a Hendrix tradition dating back to 1913. After Hendrix’s football team, then called the Bulldogs, defeated Ole Miss, over 200 male students celebrated by parading through downtown Conway in their shirttails. Over time, this celebration has morphed into a dance competition between dorms, where incoming freshmen perform choreographed dance routines in the Brick Pit.

The title references Veasey Hall’s signature dance move: the Veasey Crawl. Veasey girls perform this move each year to loud applause, and learning it is a rite of passage for those living in the dorm. Because Veasey Hall and Martin Hall are brother and sister dorms, Martin Hall’s shirttails performance always features the Veasey Crawl, while Veasey’s performance always includes Martin’s signature move: the Martin Push-Up. Vo created this woodcut from a photo of a Martin Man doing the Veasey Crawl; he is depicted right as he begins the famous move.

Vo describes Shirttails as one of the most memorable and well-loved aspects of Hendrix’s social culture. It allows incoming students to meet other freshmen in their dorm and creates friendships that last through the four-year undergraduate experience. Shirttails also brings the entire campus together at the beginning of each semester, whether to watch or to dance, and allows students and alumni to celebrate the beginning of an exciting new year.

Kristi Vo now lives in Oakland, California and is a recruiter for Asana, a work management software company. She hires designers and other creative talent to join the company, and enjoys playing tennis, cycling, participating in drop-in art courses, and practicing salsa, bachata, and swing dance during her free time.