< Back to all Exhibitions

Katrina Andry: The Promise of the Rainbow Never Came

Previous
Next
Andry’s anthropomorphic depictions point to the history of dehumanizing representations of Black people. Her half human-half eel forms suggest the continuity of color-based violence for descendants of those who survive the Middle Passage. 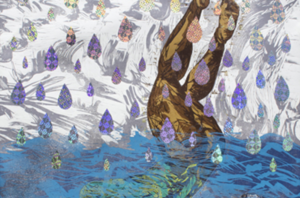 While millions of enslaved Africans were forced to undertake the Middle Passage between Africa and the Americas, millions of those who began the journey did not complete the passage. Instead, they were thrown overboard in route. People with fevers or unexplained illnesses, those recently born, those who died, and those who rebelled or resisted, were cast overboard.

Katrina Andry’s prints depict people thrown overboard. The figures, transitioning from human to eel form, are almost monstrous or beastly in their hybrid state. Andry’s anthropomorphic depictions point to the history of dehumanizing representations of black people. Her half human-half eel forms suggest the continuity of color-based violence for descendants of those who survive the Middle Passage. Falling raindrops reference the promise of the rainbow—the promise to never again be destroyed by water. For Andry the rainbow’s unfulfilled promise aligns with a reality in which Black people are still treated as less than fully human.

ZONG! is a series of poems created from the insurance fraud court case Gregson vs. Gilbert. The case investigated a 1781 loss claim for a cargo of Africans forcibly thrown overboard from the Zong! slave ship. To see performances of the poems, click the button below.

The 1619 Project aims to “reframe the country’s history by placing the consequences of slavery and the contributions of Black Americans at the very center of the United States’ national narrative.” To learn more about the 1619 Project, click the button below.

Saidiya Hartman wrote an essay entitled “Venus in Two Acts” as a way to try and document the erasure of Black girls from the public memory of racial violence on the Middle Passage. To read this essay, click the button below.

Want to learn more about how these prints came together? Check out the Anatomy of a Katrina Andry print below!

There are only three more days to visit the WMA be